If you do not have time for the details, here are our top picks for Shooting Chronographs :

How Does a Shooting Chronograph Work?

Without getting into too much of the actual science behind them, shooting chronographs are usually equipped with a pair of optical sensors. The bullet triggers the sensors as it passes by them. The chronograph then calculates the velocity using the time it took the bullet or projectile to trigger both sensors.

Is Velocity All they Measure?

While calculating velocity is the primary function of most hobby level shooting chronographs, there is some additional information they can provide.

In addition to velocity, many shooting chronographs can also provide shooters with standard deviation and extreme spread.

Standard deviation (SD) tells you how much variation there is within a set of values. In other words, if there is a lot of difference in velocity among the loads you are testing, you will see a high standard deviation. However, if they have a more consistent velocity then the standard deviation will be lower. In the case of accurate rifle rounds, the lower the SD the better.

Extreme spread (ES) is the difference between the fastest velocity and the lowest. Similarly to SD, a lower extreme spread number is much more indicative of an accurate round that is worth looking into further.

Can They Only Be Used Indoors?

Modern shooting chronographs can be used indoors or outdoors. They do require some amount of light in order for the optical sensors to function properly. The best type of weather for using a shooting chronograph outdoors is an overcast or cloudy day. A really bright, sunny day may skew your readings, but the strategic use of some shade or diffusers should rectify that issue.

Are They Only Used for Bullets?

What If I Shoot My Chronograph?

As with anything down range, a chronograph does run the risk of being hit by a stray or inaccurate bullet. That just comes with the territory of using one. However, some precautions can be taken.

If you are really worried about damaging your shooting chronograph, you may prefer a model that has a remote display unit. That way if a bullet hits the chronograph it is only damaging parts that are easier and more affordable to replace. You may also consider a barrel mounted unit which doesn’t have any parts down range that could be impacted.

Another way to protect your chronograph from a stray bullet is to place a block of wood in front of the unit in such a way that it won’t affect the performance, but will protect it in case of an accident. How you protect your shooting chronograph will of course depend on the model you choose. Always prioritize firearm safety above all else.

Now let’s take a look at the best rated shooting chronographs so you can choose the option that is best for you. 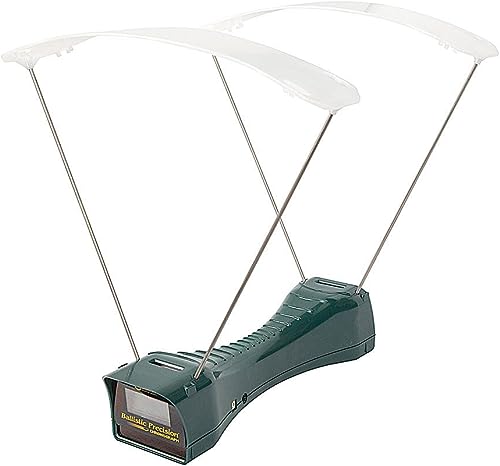 The Caldwell Ballistic Precision Chronograph is one of the best shooting chronographs for the money that is available today. This versatile unit can handle everything from bullets and arrows to airsoft pellets and paintballs. It offers readings in both Meters per Second (MPS) and 5 to 9,999 feet Feet per Second (FPS).

The Caldwell Ballistic Precision Chronograph is factory calibrated to be +/- 0.25% accurate and includes a 15 foot long cable that allows you to connect your smartphone or tablet to the chronograph and easily view data without approaching the unit each time. The corresponding smartphone app that goes with this chronograph also calculates and displays average velocity, standard deviation, min, max, and velocity spread. This data can then be exported via email. 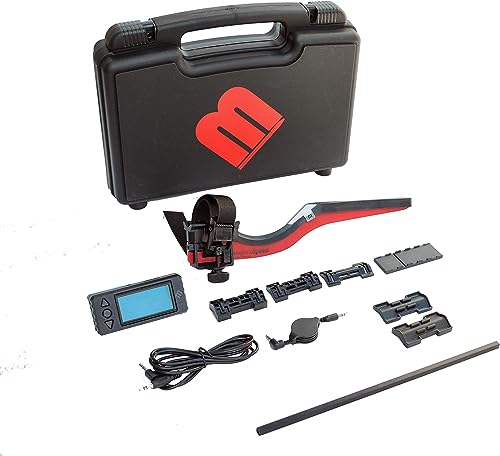 You won’t find a better shooting chronograph for under $500 than the MagnetoSpeed Barrel-Mounted Ballistics Chronograph. This best rated ballistic chronograph can be used in a wide variety of applications including rifle shooting, indoor shooting, long range shooting, and airsoft.

Mounted securely to any rifle or gun barrel with a diameter between 0.5” and 2”, this chronograph uses electromagnetic sensors to calculate shot data. The data is then sent to a remote display and saved to an SD card in spreadsheet form.

This barrel mounted unit does not run the risk of being shot or knocked over like a down range model and features downloadable updates to make sure you always have the latest version. 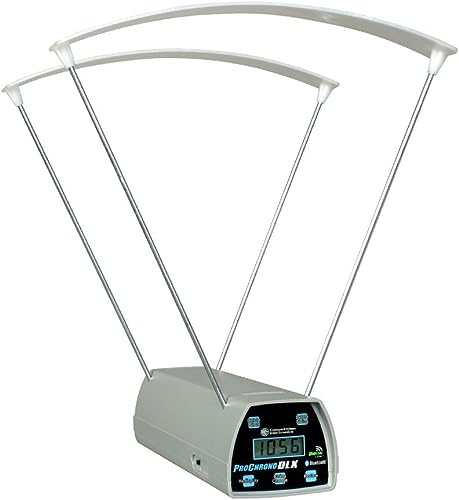 The ProChrono DLX chronograph from Competition Electronics is an excellent option for the budget minded shooter or reloader. This compact and lightweight unit can be used for everything from rifles and shotguns to bows, paintball guns, and even airsoft rifles. It can be used indoors or outdoors with the included diffusers.

The ProChrono DLX features built-in Bluetooth technology to wirelessly transmit shot data from the chronograph itself to your Bluetooth compatible smart device. This shooting chronograph runs for up to 20 hours on a single 9V battery, features +/- 0.5% accuracy, and is made in the USA. 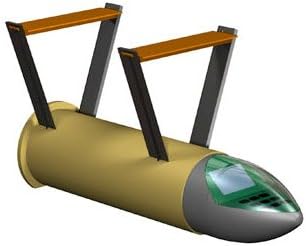 RCBS has been a leader in the reloading industry for decades. They are a brand many shooters trust. Their Ammomaster Chronograph is a great option for under $200 for the reloader who wants something functional and without a lot of bells and whistles. This bullet-shaped chronograph comes with two diffusers for use in a variety of lighting conditions and can measure velocities from 50 to 7000 feet per second.

The diffusers store inside the case which makes this unit easy to store and transport. The LCD keypad display is detachable and is equipped with a 20 foot cord. This gives shooters plenty of room to set up comfortably and also keeps the keypad display safe from any potential damage. The Ammomaster is a great option for pistol and handgun reloaders. 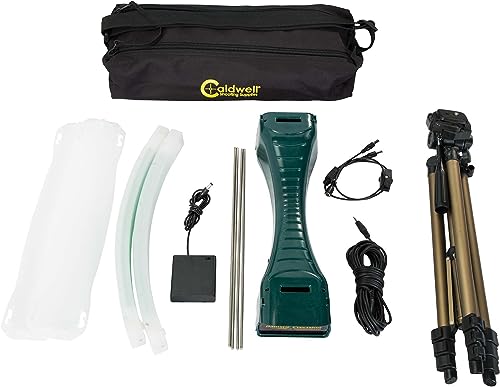 This version includes an adjustable 15” - 42” tripod, an LED light kit, and a custom carry case. The LED light kit can be used in place of the normal diffusers and helps the unit adapt to more challenging lighting conditions. The light kit features 36 LEDs and is powered by either 4 AA batteries or the included 110 V AC adapter. 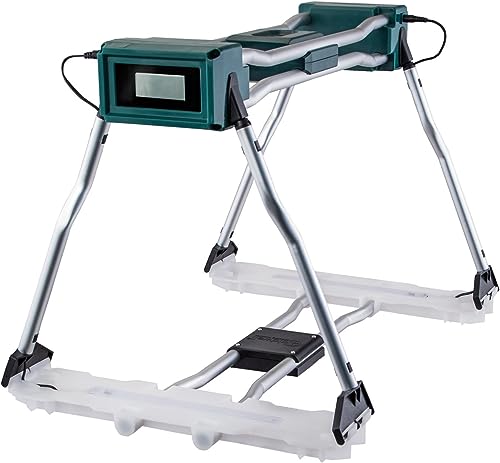 If the other Caldwell chronograph options on this list don’t tickle your fancy, the company has an even more advanced model in their line of chronographs. The G2 Ballistic Precision Chronograph flips typical chronograph design on its head and I mean that literally. This shooting chronograph has downward facing sensors. This greatly improves the accuracy of readings in adverse lighting conditions and indoors.

The optical sensors on the Caldwell G2 are spaced closer together than other models with 18” of spacing. This placement also helps to improve accuracy. The bottom mounted diffusers also feature integrated LEDs for situations that call for some extra light.

This shooting chronograph has other high-end features including built-in Bluetooth, a custom carrying case, and a rechargeable Li-ion battery. Data logs can be emailed or sent as a text message for later reference. 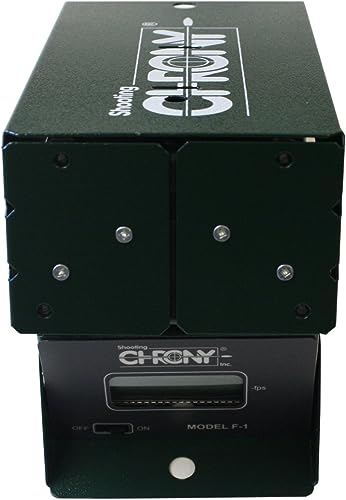 The F-1 Chronograph from Shooting Chrony is a compact option that can measure the velocity of bullets, arrows, pellets, and paintballs from 30 FPS to 7000 FPS. The metal construction and unique folding design set this shooting chronograph apart from its competitors. Shooters simply unfold the chronograph, set it on a table or mount it on a tripod, attach diffusers if necessary, and start shooting.

With 99.5% accuracy, the F-1 chronograph is a solid option for many reloaders. One downfall of this unit is the fact that it can only display the most recent velocity. Reloaders will need to write down the information or otherwise keep track of it. There is a printer attachment available that will print out shot data, but it costs extra.

Other Types of Chronographs

Not all chronographs are designed for traditional firearms such as rifles. However, paintballers, airsoft enthusiasts, and air rifle shooters can also benefit from keeping track of projectile velocity. Some competitions in those hobbies have limitations on projectile speed and other parameters that competitors must abide by. Chronographs can help. 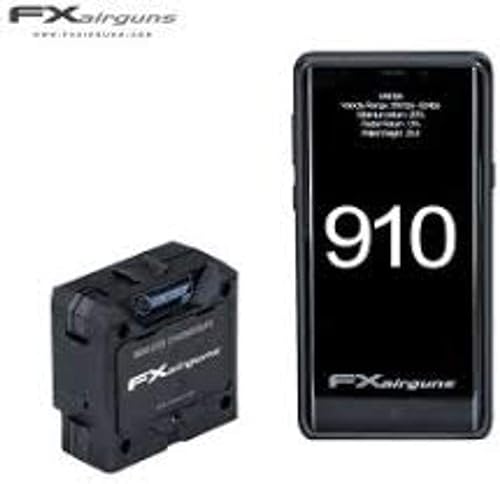 The MK11 Radar Bluetooth Chronograph from FX is the premiere chronograph for air rifle shooters. It utilizes Doppler radar to find the velocity and energy of pellets and BBs. The use of Doppler radar means that this chronograph can take readings in any lighting conditions.

The MK11 is controlled through an app that is available for both iOS and Android. Users can input pellet weight and radar return for customized data. This air gun chronograph features Bluetooth technology for wireless connection and can easily fit in a pocket. While it focuses on air guns, the MK11 will also work for archery enthusiasts and bow hunters. 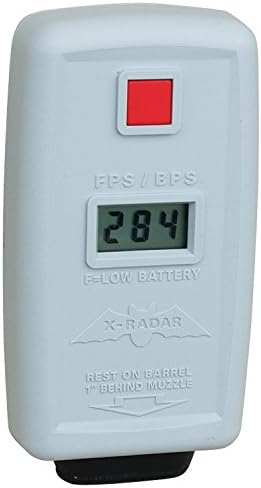 The X-Radar Deluxe Handheld Chronograph is one of the best chronographs for paintballers. It is optimized for 68 caliber paintballs and can read both FPS of a single paintball or the Balls per Second (BPS) the gun is firing at.

This chronograph uses Doppler radar technology to take velocity readings and has a velocity range of 150 to 399 FPS. 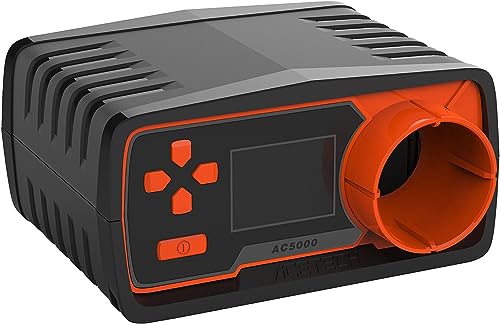 Airsoft enthusiasts will love the AC5000 Airsoft Gun Speed Tester by ACETECH. This compact unit can read airsoft pellet velocities between 90 and 1200 FPS. It can also calculate your gun’s rate of fire from 100 to 5000 Rounds per Minute (RPM).

A user-friendly interface and 25 memory slots round out this useful chronograph. 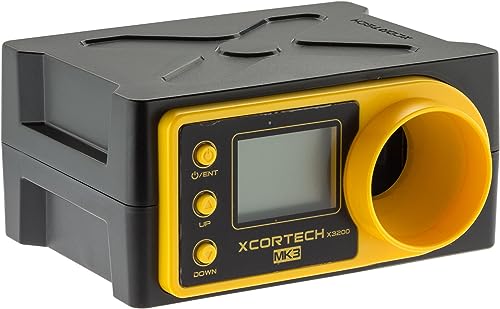 Another option for airsoft enthusiasts and BB gun shooters is the Shooting Chrono from XCORTECH. This chronograph allows shooters to input their BB weight and caliber for very accurate readings during use. The auto shutoff feature helps to preserve battery life and the LCD display is adjustable depending on lighting conditions.

Putting It All Together

One of the most important parts about understanding accuracy and how to be a better shooter is to gather as much information as you can. Bullet weight, casing size, spin rate, and velocity are all vital pieces of information that can help you figure out exactly what your bullet is doing as it races down range. This kind of information is especially useful and important for any shooters, hunters, or gun enthusiasts who reload their own ammunition.

You really can’t go wrong with any of the options from this list of the ten best shooting chronographs. Just make sure the one you choose is compatible with the type of firearm or gun you want to take readings from and you’ll be improving your reloading ability and accuracy in no time!

Brian Belko is a freelance writer and blogger. His primary areas of focus include the outdoors and shooting sports. In addition to his freelance work, Brian also writes for Wide Open Spaces and is on the Pro Staff at Military Hunting and Fishing. When he isn’t busy writing, Brian enjoys fishing farm ponds for bass and hitting the spring woods during turkey season.

ShootTheRock.reviews is a participant in the Amazon Services LLC Associates Program, an affiliate advertising program designed to provide a means for sites to earn advertising fees by advertising and linking to Amazon.com. As an Amazon Associate I earn from qualifying purchases.

Amazon and the Amazon logo are trademarks of Amazon.com, Inc., or its affiliates. Additionally, ShootTheRock.reviews participates in various other affiliate programs, and we sometimes get a commission through purchases made through our links.

We do not specifically market to children under 13.